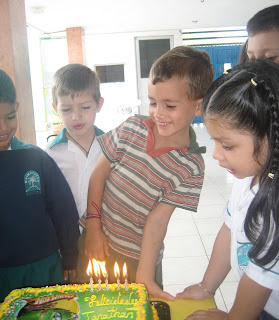 Our little guy is not so little anymore . . . he turned 5 on the 8th of this month. He enjoyed several days of celebrating which started on his actual birthday and lasted through Sunday. We have made the tradition of allowing the kids to pick a place to go and eat for their birthday dinner. So, on Thursday we went to a place called El Portón. You could probably liken it to Bob Evans in the sense that it is a "nicer" place to eat, but they have "packets" for the kids that include a drink, dessert and a prize when the meal is over.
Friday was his party at school. He was VIP all week and the parents of the VIP bring in lunch for the whole class. We also celebrated his birthday, of course, with singing and a cake.

On Saturday we celebrated with the kids from church. This party took place at our house where we rented an inflatable jumping thing 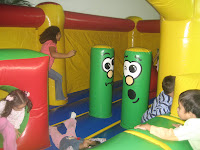 - they're called brincolines here. From when we were kids, we remember one called the MoonWalk in Erie. Does that still exist? The kids had a blast although we did have a few collisions, including Jonathan who got bonked near his left eye . . . again. Nothing like a shiner on your birthday - poor thing!

On Sundays at our church they celebrate those who had a birthday the week before, so Jonathan along with another young person in the church went up to the front to be prayed for, sung to, and hugged by the rest of the congregation! Here he is getting a hug from his brother. 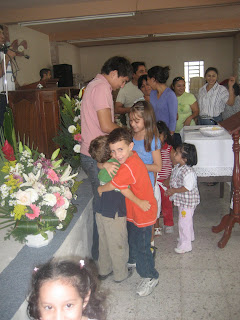 He actually still has a few presents that he has yet to open. Dave thought it would be a good idea to elongate the process so that he could enjoy each thing that he receives. He hasn't complained yet, so we may continue this idea for the other kids as well! ;-)

Posted by Unknown at 9:33 AM No comments: Links to this post 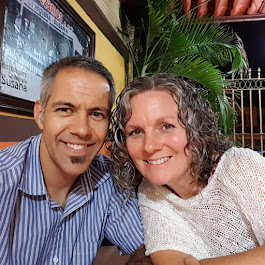 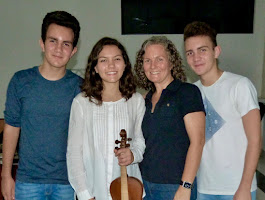